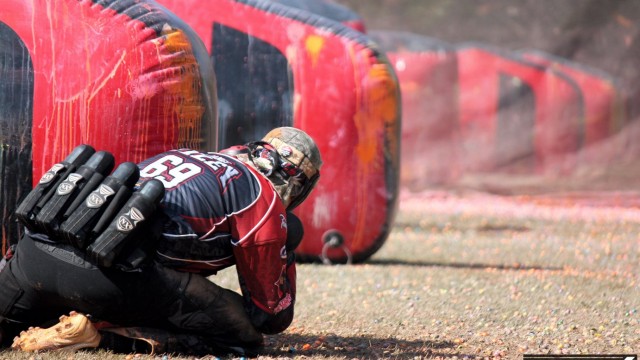 An Interview with James Riley

LSP: James, could you introduce yourself?

“I was born in Germany in 1975, my father was a GI based in Frankfurt, this is how my parents met.
I have been fortunate to travel and live in many countries and cities over the years because of that. However nothing has ever impacted my life as much as paintball, since I quit doing martial arts in the 1990’s.”

“Engaged to a lovely and understanding, passionate Italian woman who supports and understands my love for the sport and an amazing direct and extended family, which London Samurai is to me, is the only recipe that make this work and me tick day in and day out.”

LSP: Tell us a little bit about your paintball journey, leading up to taking over leadership of Samurai as a whole?

“I unluckily learned about the sport a little late in my life, however it was a birthday party of a colleague in Sept 2009, at Campaign Paintball with Tony and his gang.  Me, 34 years old, discovering an extreme sport, well I started immediately asking around if there is a competitive way in playing and I was pointed to the forums and local tournaments in the London area.”

“By Jan 2010, after a lot of reading and introducing, I had a marker, kit, for two people, since I also thought this was a great opportunity to play with the better half!, but still not a team.  So after speaking with some people running the NSPL, I decided to start getting involved as a referee for the lower divisions, which really was a great starting point. After getting trained and briefed for 4-5 rounds of the NSPL in 2010 I finally found a team that had an active community open to new players and very accommodating, London Samurai.” 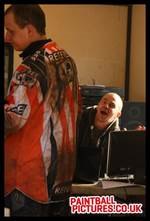 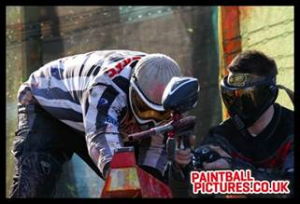 “Darren Lewis, the Coach, and Rob Bartlett, the Founder, started the club with the idea of creating a place where interested players of all skill and commitment levels can play some competitive paintball, not by jumping from team to team but start from ground up and take new players and returning players and grow them, a concept we up until today hold very dear. However back to my journey, because of their new talent  is welcome open door policy I had found a new home to train and play my first events in the second half of 2010.”

“In early 2011 I was approached by Darren and Ben Wood, the Captain of Samurai MV, with the question of Would you be interested in playing for the first team? which I was really excited about. With playing the UK Southern Masters in the Top Division and winning several events and placing on the podium at the end of the 2011 season, I started pushing for more … Why are we not playing international?,  questions that presented the next stepping stone for London Samurai. Ben and myself had played the Campaign Cup 2011 and had been infected by the bug, 2012 was going to be a big season going international …” 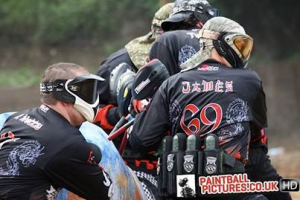 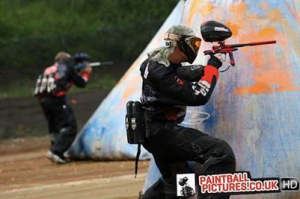 “2012, the 5 year mark of London Samurai MV and also the commemoration of Martin Vipas, our Namesake, the decision was made, we are playing domestic, CPPS and international, Millennium Series. The tour would be dedicated to Martin Vipas and we were raising money for the Cystic Fibrosis Trust. Mid that season, Darren and Rob approached me … they wanted to step down from running the club and were looking for a guy that can do the job. They asked me… and I guess that is where the past becomes present and here I am” 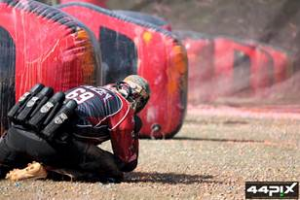 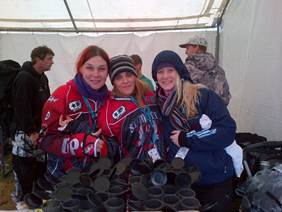 “As much as it came as a surprise and honour, I also understood that this would impact a lot on how London Samurai would develop moving forward and this included a lot of responsibility especially expanding into higher leagues and across multiple squads. So I spoke with a few members to help since it is a bit more than owning and managing a club. There are also elements of sponsors, vendors, teams, individuals, the highs and lows, the politics and keeping it all professional.” 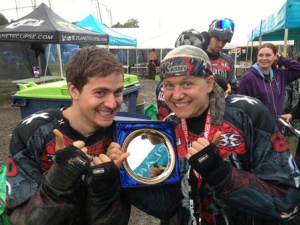 “I have never looked back and regretted taking on the overall responsibility nor working with the people that hold Samurai together, since it will not come as a surprise, I don’t run this show on my own at all. People have left, people have joined, a paintball club is like a living organism that grows and never stands still. Like the game you have to understand, adapt and get better…  and I try every week to learn a bit more about how I can do this job better.”

“So at this point a huge thank you to Ped and all the team Captains: Ben, Jeremy, Rob and now Paul. And all our players for their support and trust, and criticism, which I do appreciate and wish to accommodate as much as I can.  But also to the individuals that go the extra mile by taking care of our Facebook page, Website, Media, etc.  It’s a long list of people so I am not going to list them all , but without you this would not be possible so THANK YOU ALL SO MUCH!!!”

LSP: Can you tell us what the “Samurai” group/club means to you? (why you keep it going, any mottos, rules, a little about the structures/teams, etc…)

“London Samurai is like a 2nd family to me and MY family. There is no day that I am not in touch with one of them and the amount of conversations outside of paintball, private, professional or any other topic, has pretty much been discussed or touched at one point or the other.”

“But I think the most important thing that keeps this going is the dream or the people starting London Samurai in 2005, with the plan in one day playing at the top with other Pro/Semi-Pro teams. 10 years later, we are almost there, and I want to make sure I push this club over the finish line and keep them there. A lot of work has been put in, but that doesn’t mean it is done. There is much more that needs to be done, since getting to the top 20 teams in the UK is one thing, STAYING THERE is an entire new story and the next chapter that we are starting to work on in the 2014/15 season.”

“To maintain the teams/roster sizes in the current leagues we need a mix of entry level, intermediate and advanced programs, since this is the only way to maintain a constant talent pool for the higher teams and divisions is fresh blood into the sport.”

“For this we have loosely structured a concept which currently is:”

“Here we give people the chance to move up and over depending on their skill and commitment levels, time and financially, since it is a fairly demanding sport if you want to play on the top level both financially and time wise, especially if everything comes out of your players pockets.”

LSP: James you play for Samurai MV, can you tell us about the team? (share your love for the team mates)

“London Samurai MV, first word that comes to mind, BROTHERS! I don’t know how else to describe it but each and every one of them could call me at 3 a.m. in the morning and tell me I need your help! and I would be there without even asking what the issue was. Because of the travels and living together while on tour, a family like feel has grown and every player on a team that has been together for a few seasons will be able to tell you it feels like a second family you live with when not at home.”

“Another aspect we learned to appreciate is the pit crews and coach that, even while not playing or getting anything for it, being there and helping the team play and succeed, get up in the early hours and kit up with us and support us through the day. Big thank you to all the pit crew which have been girlfriends, wives, friends and players of the team and other teams in the last seasons.”

LSP: What are your aspirations for the Samurai family during 2014 and beyond?

“2014 in my eyes will be the “silence before the storm” since there are some insane plans for the 10 year anniversary of Samurai Paintball in 2015.”

“London Samurai MV is playing their first season in the RaceTo4 circuit, while MV2 and TopCats are growing into the higher level RaceTo2 Divisions. Rage and Dojo will be working their way up the ranks in the 5-man format. Of course all teams would like to push for promotions at the end of the season, but time will tell how that will pan out. We put a lot of work in over the last years, lets see if it pays off”

“2015 and beyond will all be dependent on how we transform the current structure into a sustainable one, in terms of player volume but also financially, which is going to be dependent on our performance and how we can develop relationships with supporters, partners and sponsors.”

“In my head I see London Samurai playing CPPS (UK), Millennium Series (EUROPE) and PSP (USA) in the future and not just for one event or year… we want to have a sustainable presence in those leagues.”

LSP: We all know that sponsorship is hard earned, what would you like to say about the companies and other entities who support us?

“We have been one of the fortunate teams in the UK that have been able to build STRONG relationships with companies like Planet Eclipse and Empire Paintball in the last years. HK Army, Virtue and DROM have just completed the deal for us delivering things that Planet Eclipse and Empire Paintball didn’t have (i.e. custom jerseys, loaders, shoes, etc.).”

“However sponsorship is a strong word. Sponsorship we have is more about “bulk buy” discounts and preferred prices on goods & gear because we represent them and their equipment when playing and promoting the sport before, during and after events.”

“A real sponsor, investing and committing financially in some way shape or form would be welcome in the future and we have plans and are working on things we can offer in exchange… but that is between us and them, so I will leave it by that.”

LSP: Do you have any words of wisdom for new players who would like to join the sport, or join the Samurai family?

– “You don’t need the newest and shiniest gear to start playing paintball, focus on playing, rather than what you are playing with.”

– “Never be afraid to ask for help or advice, paintballers are a crazy crowd, but the last thing they are, is unfriendly, so let them help you!!!”

– “Last but not least, never forget your real life commitments, speak to your family and friends about the sport and passion you have for it, share it with them. They might still not agree with it, nor understand why you do it, but they will see what it gives you and that might just be enough for them to accept you playing the sport on a competitive level.”