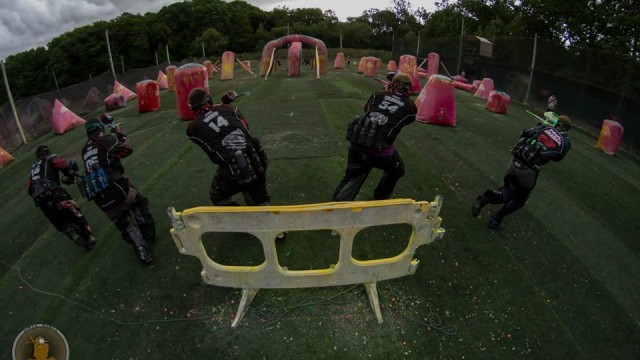 SPL Round 4 – Rage through the Storm

Over the weekend of the 9th August, Samurai Rage took to the field to play Round 4 of the Southern Paintball League at Bricketwood Paintball Centre.

The Saturday was a chance for the group to train and learn the field dynamics. Linking in with another team who were also participating in the SPL, Rage and DOA practiced against each other to find the flaws and prime points that could be used in the breakouts on the following day. A great days training left the team of five in a comfortable place. 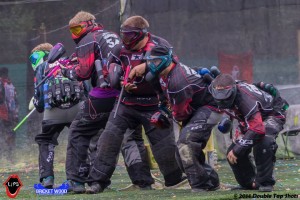 The Sunday was forecast to be a bad day in weather terms as the UK suffered the remaining effects of Hurricane Bertha but none the less, seven teams joined the 5 Man Division to see who could take the podium positions. The tournament started off with most teams playing before Samurai Rage took to the field giving the chance to see how the other teams were breaking out. Samurai Rage eventually came out onto the field against their first opponents, the same team as they had been practicing against, DOA. A close game was played leaving only Paul left to play off a 2 vs 1 on the snake side. Moving up to the middle Snake bunker, he started to make his move to see one opponent come off after a flurry of paintballs and then upon turning his marker across field, saw the second opponent taken out. At first it was assumed Paul had some very fortunate and excellent shots but it turned out later in the day that DOA suffered a 1 for 1 penalty due to the snake player showing signs of a paint splatter. Either way, Rage took the first round.

The next opponent was Collateral Damage. This team had just played in the morning tournament and had taken first place in the Race to 2 Division so were seen as a true force to play. Admittedly I would say that allowing a team to play two divisions, Race to 2 and then 5 Man where the 5 man entry is advertised towards more intermediate teams starting out seemed a little unfair, especially considering the level and experience of those within Collateral Damage. 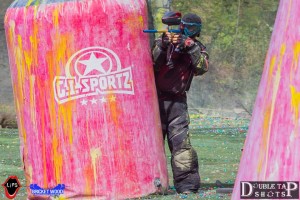 The round was still played though with Rage exploding out onto the field and crushing Collateral Damage, took the round with four players still alive! A great achievement but the squad kept their heads as they prepared for the next round.

The third opponent was one that Rage had been keen to complete. Against CareBears Rippa, this team was drawing third with Samurai Rage on the overall leader board so the next two rounds of SPL would determine who would hold the 3rd place. The round was played and despite another early exit from Rage’s Snake player, the team only dropped one more player and took their third straight win of the round with three players still remaining.

The fourth round was up against the team who held second in the league over all, Cardinals 2. The game was a good one with movement and plays by both sides but Cardinals once again showed their strength taking the round off Samurai Rage.

Despite the loss, Rage picked themselves back up and went on to take Cardinals sister team in the league, Cardinals 3. Determined to show a better game, Rage played aggressively and despite three players being eliminated, Rage took the win and their fourth game out of five thanks to some great action between the duo of Dario and Ed pushing the Dorito and central elements of the field.

The final round robin round was against Mayhem Knights who had managed to win every previous game against Samurai Rage in the last three rounds showing the might of their team. The Rage squad wanted to turn this streak around against this confident opponent but unfortunately it was not meant to be with the Knights advancing the game in their favour. 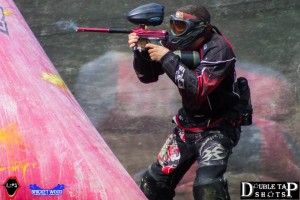 Coming off the field, the Rage squad sat confidently on 4 Wins and 2 Losses.

The set-up of this SPL round had been altered from  the previous three rounds and instead of playing all the teams again, the teams were split out between the top four and the bottom three teams where each team would play off against those in their split division to see where the final standings stood. With the results Rage had achieved, they were positive to believe they were in the top four placements alongside DOA who had managed to also achieve 4 Wins and 2 Losses. As the results were produced the positions were announced and Samurai Rage were surprised to hear that while DOA had achieved 2nd place out of the seven teams, Rage were languishing in 5th!!!

Confused, the question was asked “how?” and then it was announced that five of the seven teams had all achieved 4 Wins and 2 Losses meaning the Elimination difference had come into force and Rage were at the bottom of the five who had picked up the same scores. While it was a little annoying, Rage prepared to play off against sixth position. Sixth place turned out to be none other than CareBears Rippa. This was it….this round would pretty much decide who would walk away with the third position on the overall league podium position and Rage prepared for one hell of a match. 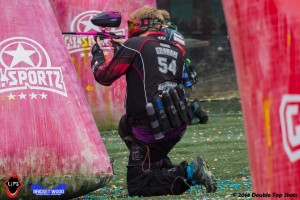 In between the games being announced and Rage going onto the field, the league was interrupted by Hurricane Bertha’s activities and everyone including refs and organisers dived for cover as a hail storm, accompanied with lightning and thunder swept through. After ten minutes of lingering under metallic roof covering (always confident to be under in a lightning storm), the weather subsided and the games continued, albeit in much wetter conditions.

Rage took on their adversaries CareBears and the game proved a hard one but Rage were determined to show that despite some other teams having changed their roster for more experienced players back in SPL Round 3, that Rage were the stronger and the game turned in their favour. Rage took the victory and the knowledge that, at least over all, Rage would be sitting above CareBears Rippa in the league tables.

The final game for Rage was against Cardinals 3 who had been having a pretty unfortunate day with no wins throughout their matches. Unaware of this position for Cardinals, Rage took to the gate for the last breakout. A friendly fire mistake from the word ‘Go’ meant Rage’s snake player made it to his bunker before coming off the field with a large paint mark clearly visible on the lower leg. Rage were down to four players off the start but determined not to let that affect the game, Rage played strongly. Gradually members of the Samurai team started to be eliminated until all was remaining was Dario against three Cardinal players. Positioned in the Dorito bunkers, Dario kept shouting out information to the empty field and managed to stop one of the Cardinal players mugging him.

Despite the valiant attempt from Rage’s Dorito player, Cardinals eventually swooped in and took the game.

The final results eventually came through and despite Rage walking away from the field with 5 Wins and 3 Losses, they finished fifth.

From the position of Team Captain and those who approached me after the match, the same thoughts were uttered that the final position of Samurai Rage certainly did not reflect how they had played. The team had experienced one great day of games which in two of the three cases where losses were made, it could have quite easily gone the other way. The team walked out of Bricketwood knowing that their performance had been one of their best and it was just bad luck that most of the competition had achieved similar results. 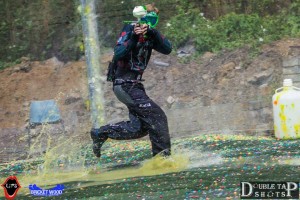 Holding third place over all in the league placements of SPL, Samurai Rage are in a great place to hold this result through Round 5 in September but the whole group are making sure they don’t become over confident as there is still a strong chance of a comeback from CareBears Rippa. While this is in the back of our minds, it’s also noted that second place, Cardinals 2 are also only 16 points ahead so everything is to play for in the final round of the SPL.

All of this couldn’t have been accomplished though if it wasn’t for the support of London Samurai’s sponsors, the Planet Eclipse markers performed perfectly despite the worsening conditions of the day, the Empire Evil Paint fired flawlessly providing the accuracy that we had come to expect from a great paint distributor, and the Drom footwear & Virtue Hoppers ensured we continued the day without any problems. A massive thank you to those sponsors who have made this all possible for Samurai Rage to perform as they have been over the last several months!